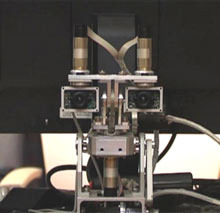 “European researchers have developed a robot capable of moving autonomously using humanlike visual processing. The robot is helping the researchers explore how the brain responds to its environment while the body is in motion. What they discover could lead to machines that are better able to navigate through cluttered environments.
Future vision: This robot navigates using input from two cameras that serve as “eyes” in a movable “head.”
Credit: Antonio Frisoli

The robot consists of a wheeled platform with a robotic “head” that uses two cameras to capture stereoscopic vision. The robot can turn its head and shift its gaze up and down or sideways to gauge its surroundings, and can quickly measure its own speed relative to its environment. “

From barcamp Sydney 5, June 2009, by David Jones @djinoz
Interesting ideas and I enjoyed the talk.

In a subsequent post I’m going to talk about the analogy to cloud computing. Some parallels between iPhone cathedral (but stable base for innovation in apps) and Cloud Platform (PaaS) cathedral (fixed and stable base for innovation).This is at least partially inspired by a post from @beaker about iPhone being similar to cloud as ultimate consumer platform http://www.rationalsurvivability.com/blog/?p=1088 and the follow on by @jamesurquhart at <a href="http://news.cnet.com/8301-19413_3-10274445-240.html.

In testing, the SoundSense software was able to correctly determine when the user was in a particular coffee shop, walking outside, brushing her teeth, cycling, and driving in the car.

Critical steps toward ‘Awareness trend’ identified in my ‘Future of the Mobile Internet’ pitch. https://technoist.com/today-mobile-internet-tomorrow-what-slideshar

The mobile internet evolves us as humans — next 10 years will be fascinating.

For you, my friend, I give you the exclusive first listen to Paul Dempsey’s brand new tune ‘Ramona Was A Waitress’, from his debut solo record Everything Is True which is due for release August 14. (OK, so technically this isn’t Dempsey’s first solo record because he did release an album under the moniker Scared of Horses in ’98, but this is the first time he’s used his name.)

I could go on about this song, but instead I think I’ll let Mr Dempsey himself tell you about ‘Ramona Was A Waitres’: “Ramona Was A Waitress… It’s an unusual song. It’s about a guy arguing with an artificial-intelligent robot waitress about mortality. Sort of an unusual subject for a pop song but that’s just what I was thinking about as I scrawled the lyrics. Artificial intelligence and conscious robots arguing about the meaning of life. “The Ramona actually comes from… there’s a guy called Ray Kurtzweil who is an interesting character and he’s one of the foremost thinkers on artificial intelligence and what the future holds for technology. He created this program called Ramona that’s like an interactive person. As technology progresses he’s trying to build her up so she becomes more and more sophisticated and he hopes that one day in the future she will be essentially conscious. That’s the point he’s trying to make, that at some point in the future technology will be arguably conscious. I find that an interesting idea. I managed to pack it in to a pop song.

The lead singer of Melbourne band “Something for Kate” has just released the 2nd single of his new solo album. It’s about a guy arguing with an artificial-intelligent robot waitress about mortality.
http://www.abc.net.au/triplej/homeandhosed/blog/s2608379.htm

I love examples of modern AI and futuristic thinking hitting modern culture.
Follow the link to hear the song.

In case you’re not familiar with SFK’s form, they have done this sort of thing before: the first song on their #1 selling Australian album from 2003 is about Max Planck (http://en.wikipedia.org/wiki/The_Official_Fiction). [Matt] Link is from my bro in law Matt — apparently sister Suzy is a fan

IDG News Service –
Qualcomm showed off a previously unannounced version of Asustek Computer’s Eee PC based on its Snapdragon processor at the Computex exhibition on Monday, including one running Google’s Android operating system.

The new laptop — which Qualcomm calls a smartbook — is thinner and lighter than current members of Asustek’s Eee PC netbook line-up because the 1GHz Snapdragon processor that it uses does not require a heat sink or a cooling fan, said Hank Robinson, vice president of business development at Qualcomm.

Gill and his architecture team are charged with strong-arming Google developers into writing their applications to what is an extremely restrictive set of distributed platforms. “We have a set of primitives, if you would, that takes those collections of atoms – those data centers, those networks – that we’ve built, and then they abstract that entire infrastructure out as a set of services – some of the public ones are GFS obviously, BigTable, MapReduce.

This came up in discussion at BarCamp Sydney also – Google App Engine great (cheap and fast) – if your application/and development approach fits the rules. Some developers saw it as a huge win, others felt that it led to needing all sorts of secondary servers to achieve anything beyond trivial. 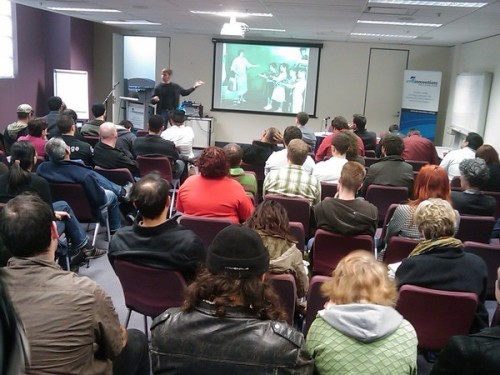 Zimbardo states that every person has a different mix of biases for viewing past, present, future. Great talk.

I think this talk provides interesting nuances to the population-based prospect theory, to assessing individual tolerance for risk, and the ‘entrepreneurial mind set’ – see also <a href="https://technoist.com/prospect-theory-applied-to-corporate-innovati.